December 11, 2017
Make sure to follow Celebrity Spark on Facebook so you csn keep updated on all your favorite celebs.

Lauren and Abbi branning will be going Of our screens as Eastenders sisters!

Lauren and Abi’s father Max, played by Jake Wood, is at the centre of the shenanigans as his long-running revenge plot finally reaches boiling point.
Jacqueline said the Christmas episodes will be “catastrophic”. 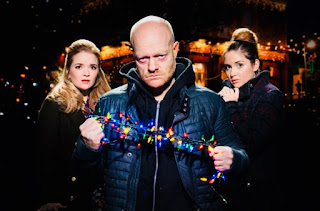 Jacqueline wouldn’t give much away about the circumstances that lead to Lauren and Abi’s departure from Walford.
But viewers have seen Max become increasingly deranged as he plots revenge for being wrongly jailed for killing Lucy Beale.

Despite being upset over her exit, Jacqueline, 25, said she is looking forward to making up for lost time with her two-year-old daughter Ella.
She said: “I’ll be sad, but I’m leaving when everyone else goes on their Christmas break, so that helps.
“But I’m really looking forward to spending more time with Ella. I do feel I’ve missed stuff these past two years.”
Jacqueline joined the BBC1 soap in 2010, taking over the role of Lauren from Madeline Duggan. Lorna joined as Abi in 2006.